The 4th August 1980, during the 18th Congress of IALP in Washington the CoMeT Board had an administrative meeting.

From 8th to 11th October 1981 took place the eighteenth CoMeT symposium in the Delf Room of the American Hotel, in Amsterdam, coordinated by Dr. W. R. G. Goslings, somedays before the UPE meeting.

There were 21 communications. The social events were the opera performance “The Cunning little vixen” from Janacek, a concert by the Amsterdam Philharmonic Orchestra and a lyric session.

The ninth symposium took place in the Lennox Hill Hospital in New York City from 12th to 13th June 1982 arranged by W. J. Gould. There were 17 participants and 40 guests.

The main topic was “Registers” by H. Hollien and 9 free communications of 20 minutes. Half of each time period was for discussion A day was dedicated for papers of non-CoMeT members.

The tenth symposium took place in the North British Hotel in Edinburgh from 12th to 13th August 1983 preceding the congress of IALP, and organized by H. Hollien. In the program was a mistake and the numeration of the meeting. Twenty three individuals and 19 members attended the symposium. There were committees reports, six communications and one film.

A Jacobean Banquet in the old Dalhouise Castle and a musical evening were the social events.

The eleventh symposium took place at Salamanca University on the 4th and 5th september 1984, coordinated by J. Perello’ after a meeting of UPE. The main topic was “Assessment of voice aptitudes in student singers” by Faure, Heidelbach and Seidner. The fellows and non-members were 106. It was proposed to nominate Van Leden Honorary President.

The night to vote officers of the executive committee would be extended to associate members. It was proposed and accepted to have two secretaries, one for Europe and another for extra-Europe countries. Croatto and Hirano were elected for these charges. Member of CoMeT made an entertainment show and a lyrical concert by “Cuarteto de Madrigalistas” in a 15th Century chapel, was the principal social event.

The twelfth syposium took place in Villefranche-Nice (France) from 31st to 1st September 1985, organized by G. Perdoncini, immediately before the Congress of Cleft Palate in Montecarlo.

It was decided that members of the executive committee may remain in office for a maximum period of 6 years of which no more than 3 years in the same office. The President would be elected from the Executive Committee.

Any paper presented for a non member had to be sponsored by two fellows or active members. The right to vote would be extended to Associate members. The scientific program of any CoMeT meeting had to be approved by the President.

The thirteenth symposium took place in Hotel Lotte, Seoul from 30th July to 1st August 1986 arranged by G. R. Kim, somedays before IALP Congress. The main report was “Geographic and Cultural differences in singing” by Hirano, Kim, Kotby, Sondersten, Wendler and Feder. The general assembly decided that all papers would be presented in English and the annual fees would be increased by 20 dollars, Winkel suggested the preparation of a manual for singers.

The fourteenth symposium took place in the Hotel Milano in Padova from 8th to 10th August 1987. The main report was “Dysphonia in professional voice users” by B. Fritzell. There were free papers and videos. Hirano was elected as President. The executive Committee 1987-1990 was:

The social event was the presentation of Aida in the Verona Theater.

The fifteenth symposium took place in the Comic Opera in Berlin, from 11th to 13th September 1988, organized by W. Seidner immediately before the UPE meeting in Erlangen (Germany). The main topic was “Extreme voice functions in artisic usage. Physiological and pathological aspects”. 76 people attended the meeting and 27 papers were read. The members assisted to the opera “Die Entführung aus dem Serail” by Mozart. J. Kowalsky, world famous countertenor, gave a performance in honor of the CoMeT symposium. 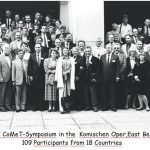 The sixteenth symposium took place in the Medical School, Hannover the 14th and 15th August 1989, organized by E. Loebell. A total of 15 people, 11 members and 4 non-members attended the symposium and a total of 5 papers were presented. The General Assembly decided that there would be no CoMeT during the Congress year of IALP and that by-laws would be rewritten.